Last Monday night the 45-year-old white rhino, Sudan, passed away at the Ol Pejeta Conservancy in Kenya; he was the last northern male of that subspecies. It is said that earlier this month he developed an infection in his back right leg which only added to his age-related suffering. Sudan’s death was expected, but still echoed around the world that day.

From a Czech Republic zoo to the Kenyan open savanna in 2009, Sudan was protected from poachers and was able to spend the rest of his life free from outside danger. In 2014, there were seven subspecies of rhinos left which were all in zoos and in 2015 there was only three. Now in 2018 the northern white rhinos may be on their way out as well with Sudan dead and only his daughter and granddaughter left. 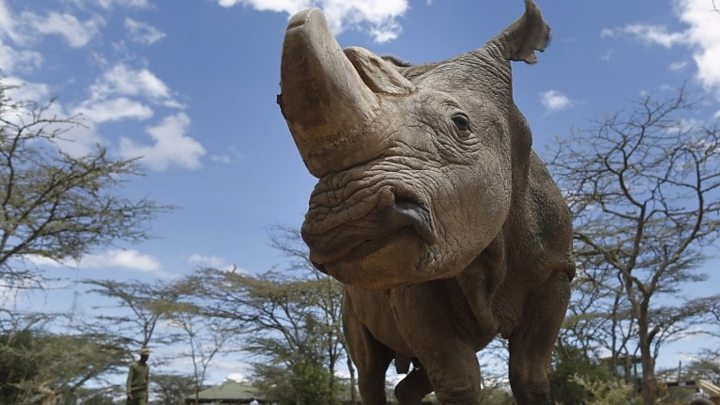 The two females who remain are unable to naturally bare offspring so scientists are attempting to create a new type of rhino from harvested sex cells. The vice president of species protection at the African Wildlife Foundation, Philip Muruthi says, “There’s no guarantee that it will work,” and he goes on to say that impregnating southern white rhino surrogates could cost over $9 million. Some rhino skin cells have been successfully grown into stem cells in mice, however, there is a huge difference between a small mouse and an ancient species of rhinoceros.

The threat of poachers has remained constant as the extension list grows longer. Sudan’s death has brought much needed attention to the killing of rhinos, elephants, and many other lesser known species. Rangers as well as citizens are helping push these awful acts back.  “We often forget that the best protectors of these landscapes are the local communities. Their efforts are ultimately the best immunization against forces that threaten both their wildlife and way of life” (Time.com). Sudan has been a symbol of humanity’s negligence and hopefully this tragedy will spark a lasting change against poachers.